We, 5.10.2022
Weather
Customer Care
Subscriptions
Announcements
Advertising
RUS
EST
Please note that the article is more than five years old and belongs to our archive. We do not update the content of the archives, so it may be necessary to consult newer sources.

In the poll organised before Mr Savisaar fell ill, out of prescribed options, Mr Savisaar and Mr Kallas were favoured most pocketing 13 percent of popularity among 1,251 respondents.

According to the study, Mr Savisaar was preferred by people with upper secondary education, lower income, elderly and non-Estonians. Mr Kallas was the favourite inhabitants of Estonian nationality, higher education and income.

The diplomat Ms Kaljurand, supported by 10.4 percent, was preferred by Estonians more highly educated and advanced in years. Among the young, under 25 years of age, the MEP Indrek Tarand was the most popular.

The 1,251 people were interviewed from March 11th to 19th. The poll featured 502 interviews in homes, the rest carried out over the Internet.

The next presidential elections take place in August 2016. According to Mr Voog, people’s preferences should be better formulated by then. «As the more specific names surface next year, the percentage of support will definitely change,» he added. 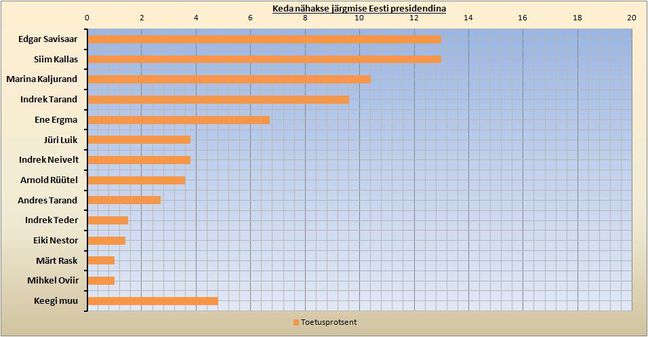